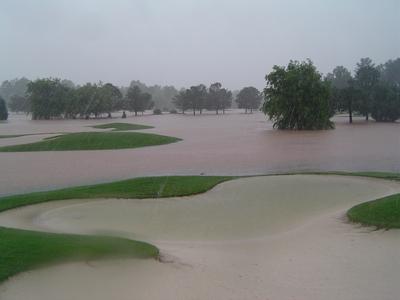 Prestonwood Golf Course, Cary, NC - June 14, 2006
Yesterday, the "remnants" of tropical storm Alberto made their way through the Triangle region. If you live around here, you could not escape the news coverage, but for those of you out-of-staters, I'll fill you in on the drama. The rain started around 4-ish in the morning, and by the time I left for work a little before 8 it was falling at the rate where you would start invoking felines and canines to describe it. My drive to work was a white-knuckler, but at least the freeway was not flooded. Once I got onto Six Forks Road, however, I found that the lane closest to the curb was more or less unusable due to the rushing torrents of water in the gutter. I made it to work fine, though, and even early. We always keep the radio on for a little background music, and at noon they switched over to carrying the audio of their TV sister station's news broadcast. We found out that Crabtree Valley Mall was closed due to the parking lot flooding, 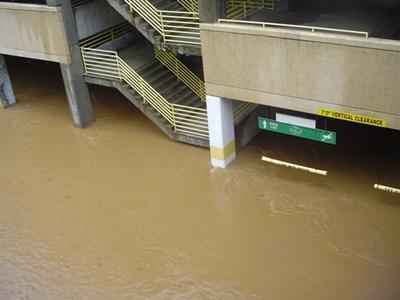 and we kept hearing about all the streets that were closed. 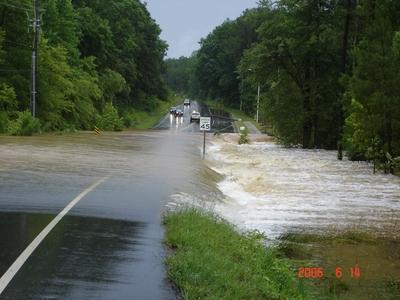 Sunset Lake Road, Apex, NC - June 14, 2006
The newscasters must have said a hundred times, do NOT drive through water, and yet still people did it. 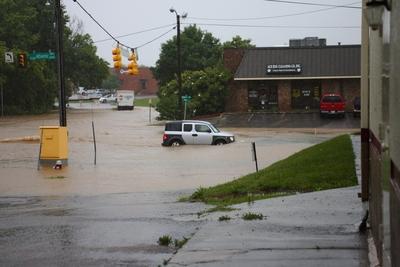 (This guy ultimately got a ticket for crossing a police barricade.)
Online I was able to watch video of the live coverage and they kept showing the feed from the traffic camera located at the intersection of Glenwood and Creedmoor, which showed a flooded out street and cars floating in it. Crabtree Creek was something like 5 feet over flood level. By 2 pm, Apex had gotten 6.7 inches, while Raleigh had gotten 7.6! We're talking in a matter of 10 hours, people! Considering that, the area managed relatively well, although there were some, uh, major problems. 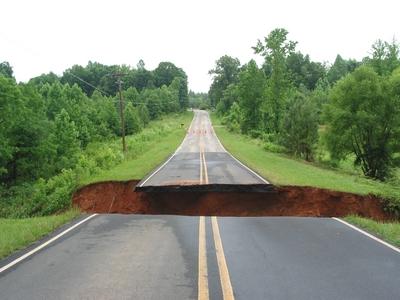 Sinkhole near the Wake-Granville border, June 14, 2006 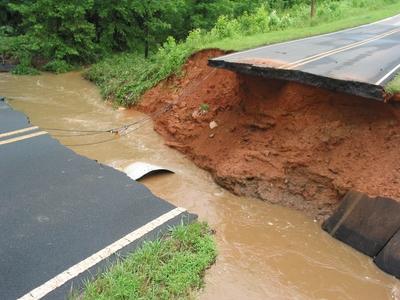 By the time 5:00 rolled around, I was fearing the worst for my commute home. After nearly five hours of listening to all the frantic reporting, I was more than a little on edge. I even called to cancel my massage (gasp!) thinking that once I got home, I would not want to risk leaving. Well, wouldn't you know, I get out on the roads, and by that time they were bone dry! Quite a relief. As soon as I got inside my apartment, I began inspecting for leaks, because I've had leaks before. I noticed that my kitchen floor had a puddle, and I looked up to find water dripping from the light fixture! I called the management office and they offered to send their on-call maintenance person right away, but I'd dealt with that guy before and he was useless (not to mention I smelled alcohol on him). So I said to just wait until tomorrow. Knowing my luck, I figured the water in the fixture would dry overnight and the guy would come in the next day, see nothing amiss, and think I'm a loon (especially since this is my fourth call for a leak--that bathroom ceiling was quite a bugger for a while). But this morning there was still water in it, so at least the guy will see I have a legitimate problem. Let's hope it's an easy fix!

All photos "borrowed" from WRAL. See the slide show of over 200 photos here.

Update: Yeah, no one came to take care of my leaky lighting fixture today. Grrr!! Also, on the news at the gym, I heard that even after all that rain yesterday, we are only one-tenth of an inch above normal for the year. So we're caught up from the drought, but not for long. Since there's no rain in the forecast until late next week, we'll be behind again in a matter of days!
Posted by Melissa at 5:07 PM