This weekend my parents and I visited several local farms as part of the Fifth Annual Eastern Triangle Farm Tour, put together by the Carolina Farm Stewardship Association. It was quite fun! The hours are 1pm-5pm, and there were 24 farms participating, spread out far and wide. We had to pick just a few to visit. It was a tough decision. Hopefully this will help any future participants choose.

1. We started out at Turtle Mist Farm in Franklinton. It was easy enough to find (we used the Garmin) and were greeted by two volunteers who gave us our "Support Local Farms" button that would serve as our ticket for all the visits (I'd prepaid for the tour online--only $25 per car load for all farms, both days). We were warned that the fences were electric, but that they weren't lethal; just a mild shock. Of course that meant I had to touch to see what it felt like! Not painful, but definitely not comfortable! The first thing we saw was a beekeeper selling honey. We bought a glass of "honeyade," which was delicious. We walked over to the chicken coops where they had several different breeds. They were allowed to just roam around wherever they pleased. Then we went down to the pens where they keep turkeys, ducks, and geese. We spoke with someone who I believe works on the farm. She gave us info about raising the birds and showed us the incubator where she was keeping turkey eggs warm until they hatch. We strolled around the garden area a bit, then wandered over to the pasture where the pigs are kept. There were four big brown ones, and a box of past-their-prime vegetables to feed to them. 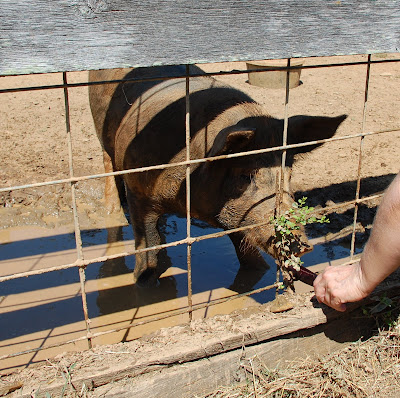 They were in a mud hole and splashed around trying to get around each other to get the food I was holding out. We saw a cow, but it was behind fencing so we couldn't get close. We walked back up to the front and bought a cup of lemonade (it was a HOT day) and then it was off to the next farm.

2. Next was Homestead Harvest Farm in Wake Forest. I enjoyed this one more because we had a guide the whole time who answered all our questions and provided lots of information. We had to put little surgical booties on to prevent contamination of the farm. Here we got to hold a baby chicken. 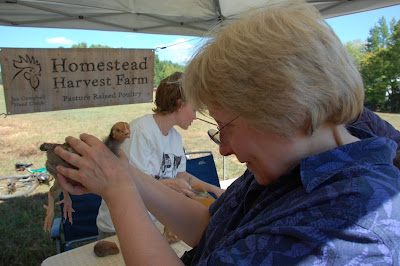 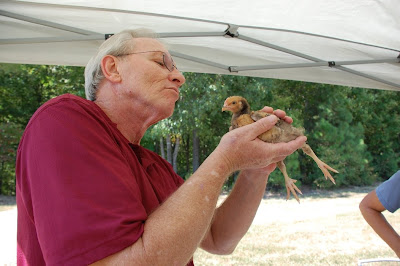 If I remember correctly, this one was 4 weeks old. He (she?) was very warm! He was molting so wasn't fully covered with feathers, and his skin was against my hand. We walked around to several of the "chicken tractors," which are coops that you can move around to different parts of pasture so they always have fresh grass, and they fertilize as they go along! These were meat chickens. The laying hens were in a different type of portable coop, one with boxes where they could lay their eggs. My dad is interested in building a coop and having laying hens so he had lots of questions. We also saw a couple of pigs. They were young, but not babies. I got to go inside the pen and pet the girl. 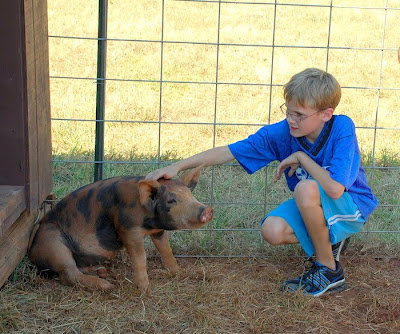 She was very sweet. The boy was not as friendly. Next we walked down to see the turkeys. They have a ton of them and they are so vocal! It goes in waves. If one starts off, the rest chime in. I was squatting down to get some photos and one came up to me, very curious. Then she suddenly reached out and bit me! It wasn't a big deal, but it was funny. It's also funny to see the males, who can turn their faces blue to impress the ladies. 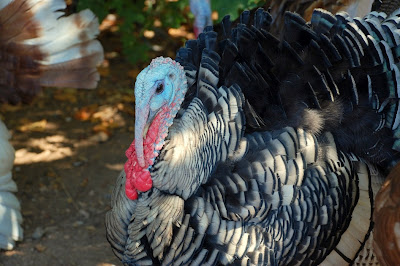 We went inside the processing house, where the chickens are defeathered, dressed, etc. We bought more lemonade (!) and then headed back to the car.

3. The final farm for Saturday was Meadow Lane Farm in Louisburg. This was also enjoyable because the owner, Martha, gave us a tour and filled us in on all the history. The farm has been in her family for almost a hundred years, and the farm house was originally built in the early 1800's. They are in the process of restoring it, which is quite an undertaking. We met Lily, their sweet Australian Shepherd working dog, and stood in the shade of an absolutely enormous pecan tree. We saw the goats that they show at the State Fair, 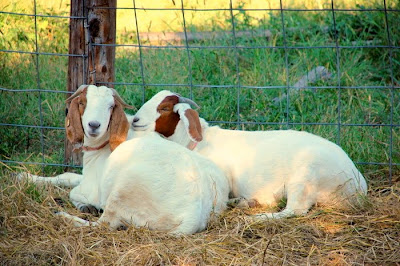 and as we were driving in we saw lots of their cattle. They raise them as nature intended--open pasture, lots of sun, etc. They are even certified humane. Mom and Dad bought a pound of ground beef and I said I'd eat a hamburger made from it...since I know it came from a cow that lived a happy life. It will be interesting to see what it tastes like. I don't know if I'll even like it! They were giving out samples of their bratwurst, but I didn't have a piece. One thing I was shocked to learn from Steve, Martha's husband, was that only about 10% of what's sold at the Raleigh State Farmers' Market is actually grown in NC!! He said the Durham Farmers' Market is much stricter about who they let sell there. I will definitely have to check that out soon.

1. I ventured out on my own to visit Prodigal Farm in Rougemont. They raise goats and have a dairy that was just certified two weeks ago. I was escorted to where the next tour would begin, and while I waited with some others, we sampled different cheeses. I tried the marinated feta (delicious!) and the "Bollywood" which had curry and pear. I also had a sample of the "goat cheesecake." It was chocolate flavored and tasted just like regular cheesecake until the end, when you got that little punch of goat cheese flavor. Dave, the owner, brought the goats up to the dairy 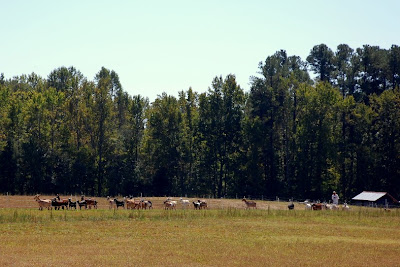 so the visitors could pet them. They were very friendly and liked to rub up against you. I caught one little goat drinking from what I would assume was his mom, but who knows. He wasn't a baby, but must have been young enough. I went over to get a picture but then he stopped. I pet him, and when I stopped, he took his hoof and pawed against my leg, which I interpreted as, "Don't stop!" I love the shape of their pupils. 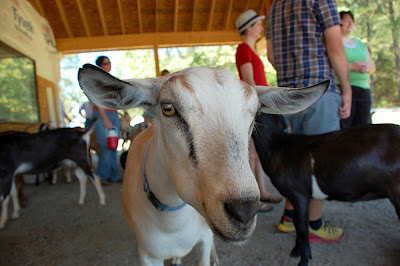 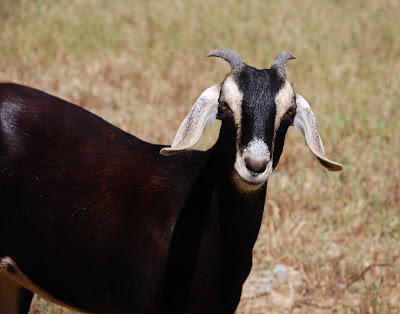 We got to see where the goats are milked, but they didn't do a demo--the goats are only milked in the morning and evening, and put out a half gallon each time. We were told that other breeds produce much more. Then we went into the room where they put the curds and whey into molds and let the whey drain out. Then, depending on what kind of cheese they're making, it either goes into one fridge to age, or it goes into a colder one until it's time to be sold. They did have a few things for sale but apparently Saturday's crowd pretty much cleaned them out. That's a good thing!

2. Next I went to Son Rise Farm, which was the tiniest farm I stopped at, and was the shortest visit at only about 10 minutes. I saw sheep and chickens, 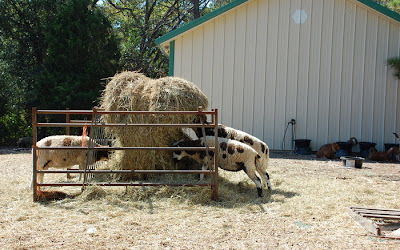 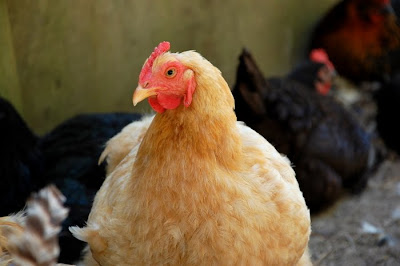 but they supposedly have rabbits too. They spin the wool into yarn, 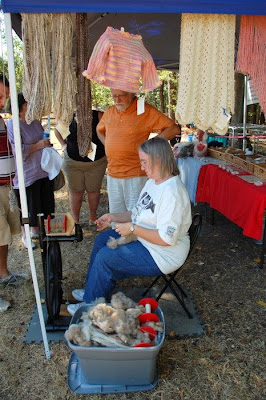 and make soap out of the goat milk. There were signs up around the different pens, explaining the different breeds, but most of the animals were out of sight, likely due to the heat.

3. The last farm I visited was Brinkley Farms in Creedmoor. It was the biggest operation that I could tell, at least in terms of produce. We got to go on a hayride 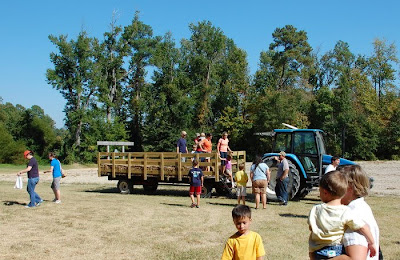 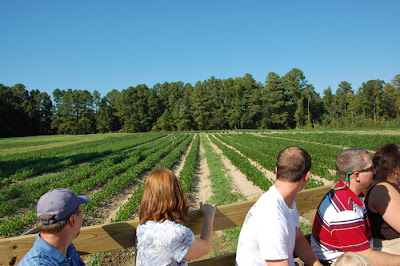 and see the pastures (again, all the animals were out of sight in the shade). They had a big barn where they were selling pumpkins and other squash. I got one to put on my porch. I heard another tour participant saying that they really enjoyed Vollmer Farm, so I'll have to remember that for next year.

Tips for future participants: Bring lots of water! Wear closed-toe shoes. A hat might be helpful to keep the sun out of your eyes. Bring cash to purchase drinks or the items the farmers are selling. There was no pressure to buy though. All of the farmers I met were very friendly and eager to share about their lives, the land, and what they grow and raise.

There is another tour in the Spring--the Piedmont Farm Tour in April. Here's an article about last year's tour.
Posted by Melissa at 8:28 PM 4 comments: