I've done this web trick before, but thought it was worth revisiting. This was the extent of my domestic travels, circa March 1, 2006: 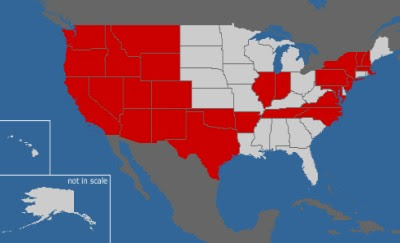 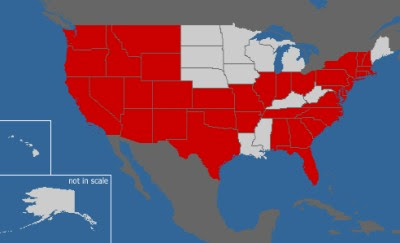 (72%)
I've added Alabama, Georgia, South Carolina, Florida, Kansas, Missouri, Ohio, Delaware, Connecticut, and Rhode Island. Not bad for a year and a half!

Make your own map here.
Posted by Melissa at 3:55 PM No comments:

In the mood for a little meme?

Came across this by doing a search for memes, and modified it a bit to suit my tastes. 1. "If I could be an inn-keeper..."
I would have a bed and breakfast in Monterey or Cambria or some other area of the central California coast. Vermont is nice and all, but too snowy.

2. "If I could be a scientist..."
It's hard not to say "I'd find the cure for cancer and AIDS" and all the other terrible diseases. But I think that answer better fits with the question, "If I had three wishes..." So, really, if I were a scientist, I would probably be working in the field of zoology, and I'd be trying to save endangered species.

3. "If I could be a farmer..."
I would definitely run an organic operation, and I would have free-range chickens (genuinely free-range, not the ridiculous legal definition of of free-range) and grow whatever grows best in the climate where I have my farm. Hopefully that would include avocados. I'd want cows and sheep and pigs and stuff, but not for slaughter, ever.

4. "If I could be a celebrity..."
I'd totally want to hang out with other celebrities, but only the down to earth and fun ones. Like Ellen--she doesn't go out and party, she stays home and plays board games. You can always tell when Ellen interviews someone if they would be fun to hang out with. And I'd definitely put my fame to use by supporting a really great cause. The only problem would be picking one. 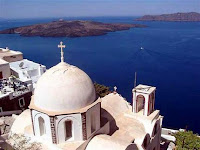 5. "If I could be a photographer..."
I would want to be a travel photographer and visit the Greek Isles and Australia and Scotland and stay in fab hotels and take pictures of the water and the buildings and the markets and the sunsets.
Posted by Melissa at 3:40 PM No comments:

I used to think that talk radio was sooooo boring. I guess it was a channel surfer and attention span thing. I hate commercials, so when one came up, I'd check the other radio stations. If I ever came across talk, I wouldn't bother to give it a chance, because it would take "so long" to get into what they were talking about. Plus, it was always some sort of advice show or political diatribe.

But then came podcasts. I knew of NPR, but really "found" NPR via iTunes, and while I enjoy many of their offerings, including Morning Stories, Story of the Day, and Driveway Moments, my current favorite is This American Life. The stories are so fascinating. You get to hear two, three, or four stories on a particular theme, such as Quiz Shows or Road Trips or Dream Jobs. I highly recommend it to anyone who has an iPod and a commute of more than 10 minutes. And if you don't have an iPod, you can still listen to it either straight from iTunes (go to the podcast section of the store and subscribe for free), or dig out the MP3 file from the iTunes folder in My Music and load it onto whatever MP3 player you have. You could also burn them to a CD, which in hindsight is how I heard my first ever This American Life show.

As a parting gift, my coworkers at my last job selected three episodes of This American Life and burned them to a CD so I could listen to them on my cross-country journey from CA to NC. They were carefully chosen based on the theme, to jokingly reflect the job I was leaving behind. "Fiascos" was one of the themes I remember. I took the CD in the car, but listened to music for days and days, until I finally got tired of that. Around Oklahoma I popped in the CD and it was a delightful change of pace. When it was over, that was that, until along came podcasts.

If you're like me and can't wait for the next episode to appear in a week, you can also listen straight from This American Life's website. The archive goes back TWELVE years! I can't say enough good things about this little gem. Just listen and you will see!

P.S. They also have a TV show on Showtime that goes by the same name; I've only seen it once because I don't get Showtime but it's probably worth watching too.
Posted by Melissa at 10:14 AM 1 comment:

I dreamt last night that a sister of a friend was pregnant, cheerfully walking down the street with a big belly and cute flippy hairdo; I was riding a motorcycle around a town that was part Las Vegas, part Savannah, doing 60 in a 16 zone (16?); staying in a hotel room full of dust bunnies clinging to the walls and a gang of spiders that kept disappearing; trying to take a photo of a sea creature in one of those aquarium touch pools, and it turned into a piranha and bit me on the hand; going down stairs without guard rails which caused me to fall; and shopping in Big Lots where I spent $85 on Big Lots crap, and I had to bag my own crap.

So does all this wacky dreaming mean I'm psychic, like my mom says, or just severely disturbed?
Posted by Melissa at 9:51 AM No comments:

I went with my parents to the Carolina Christmas Show at the fairgrounds yesterday. It was fun to browse through all the vendors, but they really have some nerve calling it a Christmas show. Only about 10% of the stuff was in any way holiday related. Mostly it was people selling jewelry, specialty foods (read: yummy samples!), and the kind of as-seen-on-TV products you always see at these kind of shows. I was suckered into buying "Touch of Purple," purportedly one of those magical all-in-one cleaners. It did a good job on my silver ring, and is said to keep dust off ceiling fans for months at a time, too). I also got some massaging insoles for my shoes. They are trippy! They have this gel in them and when you walk it swishes around. My feet did feel better than they normally would have after a day of walking around, so they were worth it. I also got a couple of nifty hook gadgets for vinyl siding, so you don't have to put a nail in the side of the house to hang a wreath or other such items. Overall it was a good time.

Afterwards, we browsed through the flea market that is at the fairgrounds every weekend. It was pretty hot, so we didn't explore every aisle, but we did linger over some wooden rocking chairs and bench cushions. Also, I ordered a wall hanging for my new office as an acoustic accessory because the bare walls are very echo-y. Hopefully it will arrive in a week or so.

Today I'm going to take care of a couple things that have been desperately crying out for attention lately: a pedicure and an oil change (well, actually just a filter change--synthetics don't require as frequent changing as regular oil). I would love to get into a monthly routine for pedicures, but I usually find myself wanting one on a Sunday, and most nail places are closed on Sundays. But I found one in the mall that is open, and they have reasonable prices, so we'll see how they are.

Tomorrow I'm off to Vermont, which is exciting for two reasons. A) It is going to be much cooler there, and B) I get to fly on Jet Blue. My flight leaves at 6 am (ug) Monday and then I return home at midnight on Tuesday (ug again). I have a four-hour layover in JFK. I've never been to that airport before, so that should be interesting. I suppose if I were really adventurous, I would take the subway into the city and grab a slice of pizza or something, but I'm too paranoid about complications causing me to miss my flight.

One thing that will be interesting for this trip is that I'm still taking on-call shifts both Monday and Tuesday nights.... Monday is fine--I'll be on the ground--but Tuesday I'll be in the air for a few hours during peak paging time, so if there are any calls my boss will have to handle them. He really should just take the shift, or make someone else take it, but it really is like pulling teeth with these people. I mean, it's not a lot of money, but if you do it all month it adds up quick. Something about "having a life," or something, I don't know....
Posted by Melissa at 12:54 PM No comments: 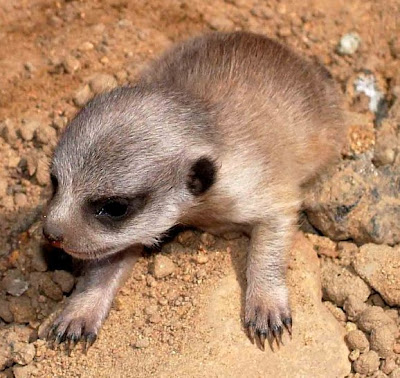 I love Animal Planet's Meerkat Manor, but it is truly heartwrenching. Len and Squiggy were Flower's latest offspring. Oh my god, they were sooooo adorable. Especially poor Squiggy, who was a runt born with a deformed paw. After endearing the pups to us viewers, Mother Nature had to go and intervene. Len ended up as a falcon's lunch when the family didn't protect him, and then they abandoned Squiggy in the desert because he couldn't keep up or forage his own food. Waaah!
Posted by Melissa at 9:52 PM 1 comment: 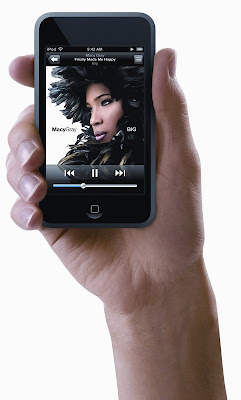 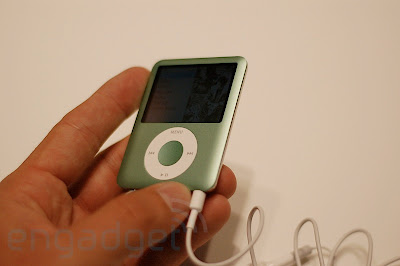 Me want.
Posted by Melissa at 7:49 PM No comments: 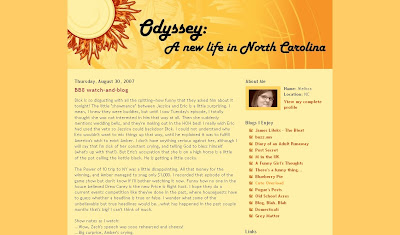 I "upgraded" templates so that I could have the label listing to the left, as well as an easier-to-navigate archive. Plus, my credits on istockphoto.com were about to expire (so lame) so I had to use 'em up on some new art. Hope you like.

Now if only summer's heat would go bye bye. Tonight it's supposed to get down to 63--yee haw! Bring on Fall!
Posted by Melissa at 7:42 PM No comments: