I don't live in one of the participating cities, but I still want to take part. Not only for the environmental statement it will make, but just because it's a cool concept for millions of people across the world to be doing the same thing at the same time. I'd like to see a satellite view of Chicago at 7:59, and at 8:01. Awesome!
Posted by Melissa at 10:26 AM No comments:

I was searching online for a map that I could print out and highlight, that would not be cluttered up by all the minor street names. I came across this and although quite funny and good to know, I think I need just a little more detail. 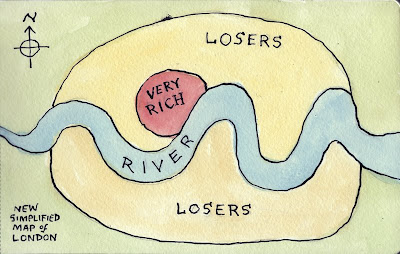 Posted by Melissa at 4:58 PM No comments:

Happy Easter, everybody! I'm sure many of you have seen the much-forwarded "Peep Show." It's been on LOL Cats (one of my favorite sites these days!) and Cute Overload. In case you missed it: 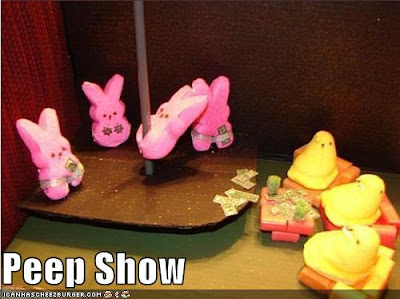 Well, if you think that's clever, you can check out 37 more! It seems the Washington Post has an annual contest to see who can make the best peep diorama. No kidding. The semifinalists are so creative and funny! Have a peek here. (Thanks Mom for sending me the link!)
Posted by Melissa at 12:31 PM No comments: 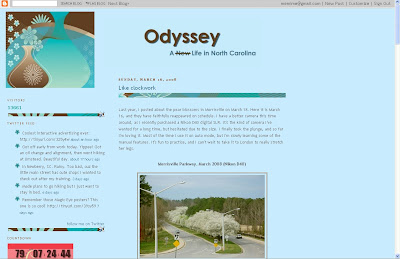 Posted by Melissa at 2:54 PM No comments:

I read an article about how a 17-year-old from Chapel Hill made his own Tide to Go commercial for a contest and is in the top 10. The winner will get theirs aired during prime time. So I went to the website to vote, and came across "Be the Stain." Not only is it totally fun, but the technology is mindblowing. I guarantee you will say, "No way!" at least once. Super neat just to try it out, even if you don't save it. Give it a shot!
Posted by Melissa at 12:33 PM No comments:

Last year, I posted about the pear blossoms in Morrisville on March 18. Here it is March 16, and they have faithfully reappeared on schedule. I have a better camera this time around, as I recently purchased a Nikon D40 digital SLR. It's the kind of camera I've wanted for a long time, but hesitated due to the size. I finally took the plunge, and so far I'm loving it. Most of the time I use it on auto mode, but I'm slowly learning some of the manual features. It's fun to practice, and I can't wait to take it to London to really stretch her legs. 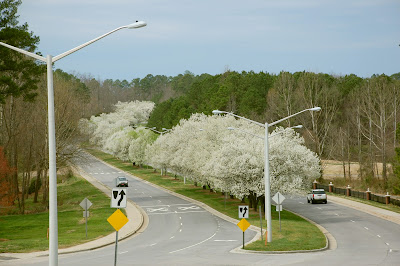 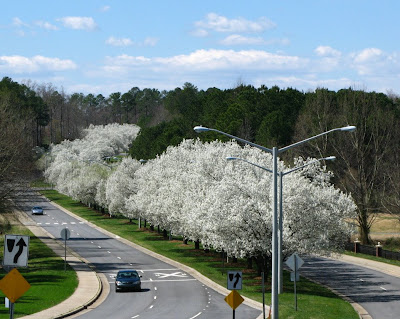 Posted by Melissa at 9:18 PM No comments: 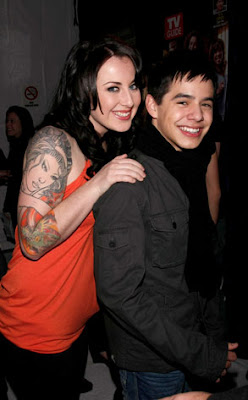 I must echo the by now trite observation that this is the best season by far. Granted, I did not watch season 1, but boy, there is so much talent up there it's crazy. I already have favorites, whereas in seasons past it wasn't till the end that I cared enough. Carly Smithson is amazing. I have loved her performances every single week. Brooke White doesn't have the powerhouse vocals, but she is so genuine and likeable. David Archuletta's rendition of Imagine a couple weeks ago was transcendent, and he quickly became the front runner. He was my favorite, too, until he butchered We Can Work It Out, my favorite Beatles song ever. Not only did he do an awful version (by Stevie Wonder?) but he forgot the lyrics. It was like watching a train wreck. I felt bad for him, but at the same time, it's not that complicated of a song. Compare that to Carly's Come Together, which has so many odd lyrics. True, she performs it every week, whereas David is so young he's out of the loop when it comes to oldies. But I think experience is a good thing. Maybe over the next 11 weeks David will begin to get there.

I was very much "what the??" when Kristy Lee Cook started singing her country version of Eight Days a Week, my second favorite Beatles song. No, no, no, no, no! But I must admit, when she sang it a second time last night, it was not as appalling. I can't believe she's still in, though.

What truly puzzles and frustrates me is that Amanda Obermeyer is still in. In my humble opinion, her voice is tuneless, grating, and entirely unpleasant to listen to. Furthermore, it seems like American Idol is the LAST PLACE ON EARTH she wants to be. Could the girl look any more miserable? I don't know what's going on with her. I can't believe she wasn't even in the bottom three, and that the judges keep giving her praise. Awful noise!

A couple others I really like are Jason Castro and Michael Johns. Jason is kinda quirky, the way he can't quite hit certain high notes but he just raises his eyebrows and shoulders as if to say, "Oh well, I blew that one, but hey, aren't I adorable?" His performance of Hallelujah was top notch, and it's remarkable that the original Jeff Buckley version is the #1 download in iTunes, even a week after the Idol bump. Michael Johns, to me, doesn't stand out, but he always turns in enjoyable performances with strong vocals.

I don't really care much for Ramiele, Syesha, or Chikezie. They're just OK. Was that Danny Noriega sitting in the audience, identified as Ramiele's best friend?? I think David Cook is a'ight, but for Simon to say he could win?? Um, no. He verges on hard rock a little too much, which just isn't my cup of tea. And I don't get a likeable personality vibe from him, like I do some of the others.

As much as I like the Beatles, and thought the "Lennon-McCartney songbook" hoopla was warranted, I am disappointed that next week is going to have the same theme. I know we've only touched the tip of the iceberg, but I think it would be nice to try something different for a few weeks, then come back to the Beatles later on.

Regardless, I will be glued to my set every Tuesday and Wednesday for the foreseeable future.

P.S. Until just now, I had not read anything about Idol on the web...shocking, I know...but apparently David A. and Carly are the front-runners and fan faves. People are even saying they like David more because he messed up--it proves he's human.
Posted by Melissa at 11:56 AM 1 comment:

Have you ever had an itch that you couldn't scratch adequately enough with your fingers because it was underneath clothing? My solution is to use the non-ink end of a pen. You can scratch away and it feels oh so good.

I got home from work today and changed into my PJ's, and noticed this: 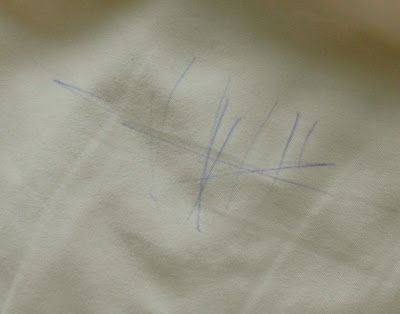 You know you're in Vermont when... 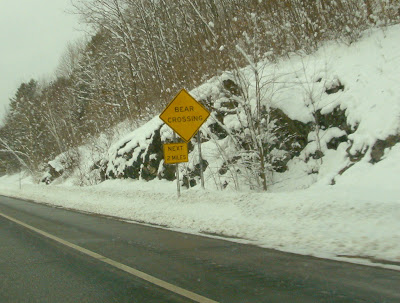 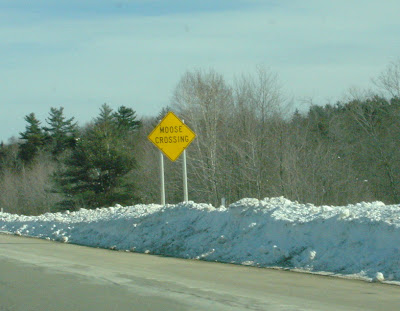 Posted by Melissa at 7:41 AM No comments:

I have not fallen off the face of the earth, as some might be led to believe by the lack of activity here. I was reading my last post, about my upcoming travel, and just had to roll my eyes. That trip to Talahassee? Yeah, total cluster. Not worth explaining in detail. Suffice it to say, my first flight was cancelled (someone smelled smoke on the plane) which threw absolutely everything off. Thankfully, though, the Friday training got postponed, so at least I didn't have to follow up the screwy air travel with 10 hours in the car. It's been rescheduled for this Friday, but since my schedule permits, I'm going up the night before, so the driving is a little more manageable.

Last week I was in Providence, Boston, New Hampshire, and Vermont. I really wish I'd been able to do some sightseeing in Boston, but the weather was awful (rain, then snow, and quite cold). But the snow in Boston was nothing compared with the snow in Burlington, VT. So very pretty, and so very cold. The icicles outside my hotel window were pretty wicked. 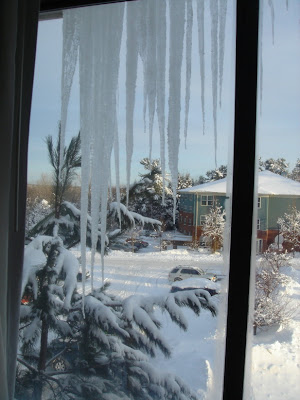 The granite from which the roadways were carved accumulate snow and ice in a fashion that can only be described as hard core! 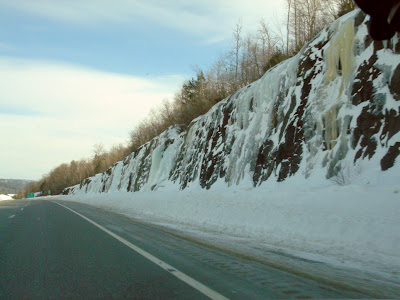 On the way from Boston to Vermont, I passed right near Hanover, NH, home of Dartmouth College. I attended Dartmouth for one quarter in 1995, during my senior year. UC San Diego had an exchange program with the Ivy League school, and I was lucky enough to be one of a dozen or so students chosen to go in the Fall. That was my first time living outside of CA, and it was really fun. I wish I'd been able to explore more, but being without a car made that difficult. Besides, I had to study like mad. Dartmouth kicked my butt academically! I got two B's and an A...yikes! Anyway, it was super windy when I was there, so I just did a quick little go-round of the quad area. 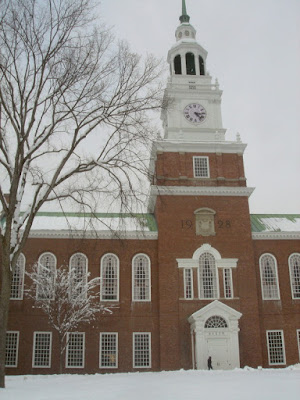 I saw these mailboxes and thought it was funny how buried they were. 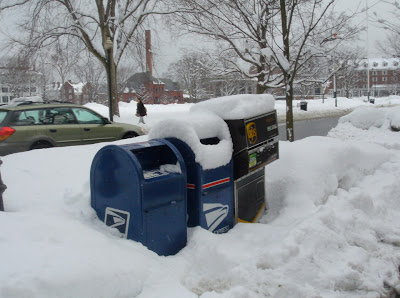 In London news, we finally booked our plane tickets, so it's official! June 9-18: London, baby! I'm actually flying from LAX, because we found an awesome deal on British Airways. It's about $400 cheaper than me flying from Raleigh, so I'm going to use my free Southwest ticket to fly out to LA a couple days before, and that way Nicole and I get to fly together. Plus, come on, British Airways is sooo much cooler than what I would have been flying--American Airlines.

We've pretty much decided on what hotel we want to stay at. Good ol' Rick Steves recommended it, and the location sounds ideal. Premier Inn at County Hall. Right near the London Eye and the Waterloo tube stop.

I feel like the hard stuff is done and all that's left to do is plan the days, but really, that's the meat and potatoes of it, so I better get cracking! I've read through Rick's overview of the sights, and I think we'll have enough time for most of what we want to see. There will probably be only one day trip, out to Stonehenge. Originally I wanted to include Bath and the Cotswolds, but with just eight days on the ground, I'd rather focus on exploring London to its fullest. Simple is good. More time to relax, because it IS a vacation, after all!
Posted by Melissa at 6:24 AM No comments: