Had a good weekend. Yesterday I went to lunch and a movie with Mike. We had Thai food at Champa. I ordered the pad thai with chicken, and it was delicious! I highly recommend it. Although our food was served on real plates, our drinks were served in plastic cups. And water was not free. Fifty cents for tap, or a buck for a bottle. Raleigh's water situation is getting pretty dire.

We saw The Bucket List, with Morgan Freeman and Jack Nicholson. It was all right, but not great. The first part was really slow and not fun at all--two old guys dying in the hospital. The pace picked up when they started working on the List, but I was hoping for a more light-hearted movie.

Saturday night I went to my parents' house and cooked dinner: Southeast Asian Turkey Meatballs. Yeah, I doubt they have turkey meatballs in Southeast Asia, but it's nice to mix up the seasonings instead of going with the traditional Italian style. I found the recipe in an old crock pot cookbook I'd picked up at the library sale. There's really no reason to cook meatballs in a crock pot when you can just pop them in the oven for 20 minutes. They're super tasty, especially with the "plum sauce" (which I made with strawberry jam instead of plum jelly--LOL).

Today I was supposed to meet up with John (eHarmony guy #4--my subscription is expired now, by the way) for brunch, but last night he called and asked for a raincheck because he wasn't feeling well. The bug is definitely making its way around the Triangle. Many at my office were sick last week, and my dad is sick now too. I hope I'm able to escape unharmed!

This would have been my second date with John. He's 39, a computer programmer, and lives in Chapel Hill. Our first date was last week--dinner (Brixx) and a movie (Fool's Gold--very cute!). Afterwards we went for ice cream. I'm not sure what else to say...it's kind of like when cops say they can't give anymore details due to the ongoing investigation. I'll let you know if anything progresses.

This afternoon I went to Lake Johnson to meet up with a bunch of coworkers for a group run. We've all signed up to do the Blue Planet run at Black Mountain in May. There's a team of 10 doing the relay (5-mile loops over and over for 24 hours!). I'm planning on doing the 5-mile "fun run." Since I'm really out of shape I think that's a much more reasonable goal! Alas, I was a little late to the lake, and didn't see anybody there. I think there was a mixup on the time. Oh well. I just walked around the lake by myself. There were lots of other people there, mostly with their dogs, and even a couple guys fishing off the bridge. I walked for 40 minutes and probably did about 2.5 miles. I tried jogging twice, and was pleasantly surprised that it wasn't as awful as I'd expected. Of course, I've still got a ways to go, but I think it'll be easier than I thought since I've done this before.

Tomorrow I've got to get up early and drive north to Danville, VA (just across the border) for an onsite training. I think it should go well because we did a lot of prep work to get everything in place beforehand. Then I'll drive back home tomorrow afternoon. Round trip: approx 170 miles.

I'll be in the office all day Tuesday, and Wednesday morning. But in the afternoon I'll be going to the airport to fly to Tallahassee, FL by way of Charlotte, for an onsite training in southern Georgia on Thursday. That evening I'll fly back to Raleigh, getting in at approximately 9, if my flight is on time. So I'll be home around 10. Friday morning I have to drive four hours back into Virginia to be at a training by 10am. Sessions go until 3:30, then I have to drive four hours home! Round trip: approx 442 miles.

It will be a looooong, tiring week! And then the next week, I'm flying to Providence, RI, for trainings in Massachusetts and Vermont. (Hello, snow!)

The work traveling has been pretty low key since the summer, when I got burnt out and requested to be home more often. I asked to have a couple trips recently, and look what I got myself into! It will be fun, though. A break from answering phones all day. :-)
Posted by Melissa at 7:56 PM 1 comment:

Yay! The Writer's Strike is Over!

This is great news. I can't wait for some new episodes of Grey's Anatomy, finally!

One thing I read in the LA Times article about the strike ending seems odd to me:

The entertainment industry employs about 250,000 in the Los Angeles region

That's IT?! There's like, I don't know, 12 million people living in the metropolitan LA area, and only a quarter of a million are employed by "the industry"? The way people talk about LA, you'd think it was half the residents. Heck, I lived there and thought it was way more. Just goes to show you how disproportionate media coverage is.
Posted by Melissa at 6:23 AM 1 comment:

I like to read the New York Times online. I get headlines delivered to my inbox daily, and although frequently I don't have time to do more than scan them, on lazy Sunday mornings I delve deeper. I was reading an op-ed piece on Hillary vs. Obama, and came across a word I didn't know. I think my vocabulary is pretty good, but they (NYT writers) always manage to use one or two words that stump me. Often I just skip over them, but today I was going to look one up: perorations. I double clicked on it, to highlight it so that I could copy and paste it into Google. Lo and behold, double clicking caused a new window to open with a dictionary definition of the word! I'm sure this is not new to many people, but holy cow, that's fantastic! Ingenious!

By the way, peroration means a flowery and highly rhetorical speech.
Posted by Melissa at 9:53 AM 1 comment:

I used to have a whole bunch on transparencies that I would put on the overhead projector and show my students on the last day of school. They're so fun and freaky (the illusions, not the students...well on second thought...). Anyway, I saw this one today on Boing Boing. Squares A and B below are the same shade of gray. 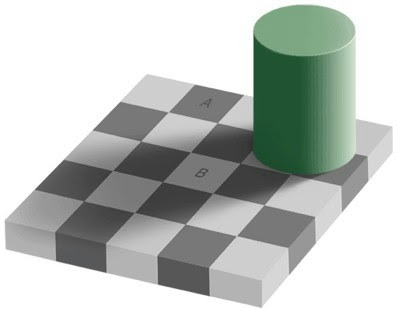 My first thought was NO WAY! But then I isolated the two squares in question, and sure enough--they're the same color!

Posted by Melissa at 3:09 PM No comments: 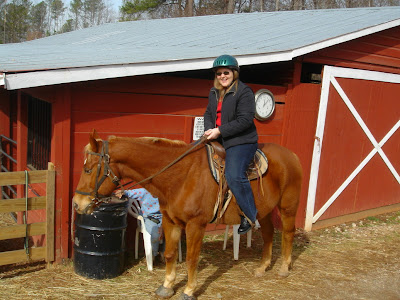 I went horseback riding today. I'd been wanting to for a long time, and last week when a friend (Mike) said he wanted to do something on Saturday, I suggested it. I'd seen an ad for Happy Trails Farm on Craigslist, and it seemed like fun.

I had not been on a horse since junior high (a Girl Scout summer camp), and all I remember is wanting to go faster. Well, fast forward 20 years, and boy does the picture change. Just getting up on the horse was a little scary! They provided a step stool (thank goodness!) but once you're up there, it feels so high (even though it's really not), and you don't exactly have guardrails or anything. It took a while to get used to the feel of the horse walking and me being jostled side to side. Thankfully the lady who was in charge was very patient with me and kept an eye on me.

The ride was through the woods up in Wake Forest, and although this time of year it's not exactly beautiful, it was still nice. It had rained pretty hard the previous day so the trail was a little muddy, and in a couple parts there were big puddles. I guess horses are trained to run through water, because that's what mine did, with no prodding from me. It freaked me out the first time! But the second time, I knew to expect it, and it was kind of fun! But I definitely have a new respect for people who gallop and run on horses, let alone people who actually jump over things!

At one point some dogs came running up to us, and the lady in charge told us to stop our horses. She didn't know the dogs, and didn't know why they were on her property. Their owner called them back and nothing came of it, but for a second I envisioned all our horses bucking us off, and the thought of falling from that high was not, shall we say, cheerful.

After an hour we headed back to the barn, and you could tell the horses were excited. I guess all creatures like to go home. Mine liked to take shortcuts. If everyone else was making a 90-degree turn to follow the trail, mine would cut the corner. Kind of funny. I'm told I'll be sore tomorrow, but right now I'm ok. If I go horseback riding again, I'd want to go someplace a little more scenic. But for my first time in two decades, it was a delightful excursion!
Posted by Melissa at 7:30 PM No comments: